How to Foster Love and Attachment with Your Baby 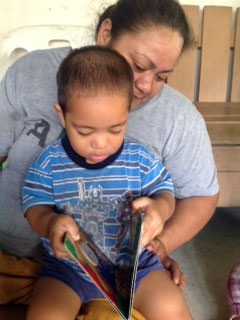 How to Foster Love and Attachment with Your Baby

My husband and I never thought we could get pregnant, but one day I woke up and there was my precious baby boy. Because Mark was a surprise, I read all I could on how to care for babies. I read in a book that a research study followed babies into their 20s and looked at what variables contributed to their happiness as young adults. It turns out that physical affection shown by caregivers early in life was the number one predictor of adult happiness.

Physical affection, devoted attention, and love overcame challenges such as poverty, divorce, substance abuse, and other environmental problems. I realized that my number one priority with my baby was to build his foundation with love: to respond immediately and sensitively to his cries and signals, and shower him with physical affection. This would create a secure foundation of attachment, and I could build language skills from there. And, of course, as a speech-language pathologist, I knew I should talk and read with him, and sing too!

The Research of Bowlby and Ainsworth

Attachment theory was developed in the 1950s and 1960s by British psychoanalyst John Bowlby and his colleague Mary Ainsworth from the University of Toronto (Bowlby, 1969; 1988). When Bowlby began his work in the 1950s, parents were advised to interact with their babies based on the dominant theory of the day espoused by behaviorists. These behaviorists told parents to avoid “spoiling” babies by picking them up and comforting them when they cried. Parents were to leave their children alone to “cry it out”; presumably, this helped the babies become stronger and more independent human beings in the process.

But Bowlby and Ainsworth carried out further research in the 1960s and 1970s that showed that the behaviorists’ advice did not bode well for the babies. Rather, babies whose parents responded immediately and with warmth and attention to their cries developed into more independent, secure preschoolers than babies whose parents had ignored them. In a nutshell, Bowlby and Ainsworth, as well as other researchers, showed that children who were lovingly and securely attached to their caregivers at one year of age were more socially competent, happy, and secure throughout their lives.

Fast forward some years to the famous Minnesota study (Sroufe, Coffino, & Carlson, 2010). The Minnesota longitudinal study of children and their parents followed 180 individuals from 3 months before birth to age 34. The children were born into backgrounds of poverty and experienced multiple risk factors. The goal of the study was to assess the impact of early life experience on persons in childhood, adolescence, and adulthood.

The study found that the most significant links between early experience and later behavior in childhood, adolescence, and adulthood were based on patterns of parent-child attachment at 12 and 18 months of age. Attachment was strongly related to caregiver sensitive responsiveness. The children’s temperament was not a clinically significant variable in the outcomes observed. The study found that securely attached children, whose caregivers were sensitive and responsive to them, had greater degrees of:

Subjects in this study who were insecurely attached had caregivers who were not responsive and sensitive to their needs. These caregivers often let their babies “cry it out” unattended, and were unresponsive to their babies’ needs. Later in life, these babies manifested a higher incidence of:

In sum, the Minnesota study solidly confirmed the great importance of positive, warm, sensitive caregiving and attachment in early infancy and the impact of this across developmental stages of childhood and adolescence into adulthood. The researchers recommended that when babies needed attention, caregivers should respond immediately with sensitivity, warmth, and love.

In the National Collaborative Perinatal Project, Maselko and colleagues examined the relationship between mothers’ affection with their infants and emotional outcomes in adulthood (Maselko, Kubzansky, Lipsitt, & Buka, 2011). When the babies were 8 months old, an observer rated infant-mother interaction quality. When the babies were adults, the researchers interviewed them about various subjects such as the amount of life distress they experienced, etc. The researchers interviewed 482 adults (average age 34 years) to examine the relationship between adult mental health and objectively measured affective quality of mother-infant interaction.

Maselko and colleagues found that high levels of maternal affection when babies were 8 months old were associated with significantly lower levels of distress in adulthood. The parameter impacted most was anxiety; adults with loving and responsive mothers experienced substantially less anxiety than adults whose mothers were less affectionate when they were infants. If their mothers were highly affectionate during infancy, the adults were much less likely to report psychosomatic symptoms, distressing social interactions, and hostility.

The researchers concluded that high levels of warmth and affection between mother and child seem to lessen the stress response and make children more resilient to difficulties later in life. The researchers concluded that the hormone oxytocin was probably responsible for this effect. When a person feels love and connection, the chemical oxytocin is released in the brain. Oxytocin calms the brain and helps the individual feel loved and secure.

√ Research over the years has conclusively proven that the best way to give our children the very most optimal start in life is to respond immediately to their cries with warmth, love, and attention.

√ When we do this, we give our children a secure foundation by setting them up from day one to be happy, secure, resilient, successful adults.